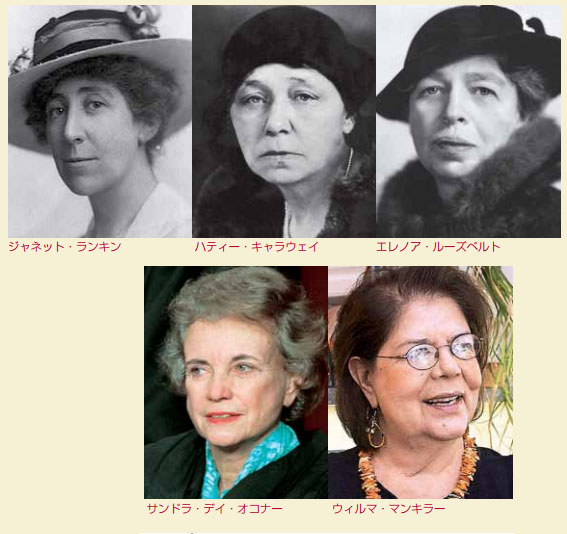 A Role in Government

The first half of the 20th century saw the United States transformed into a world power after emerging victorious from two world wars and overcoming a depression. Economic and social reforms gave workers and their families improved standards of living and African Americans increasing hope that, at last, they could secure racial equality.

These years also saw women making breakthrough gains in fields long considered outside their traditional roles as wives, mothers, and caretakers. Many attended college or took up jobs in industry while the men fought World War II. Winning the vote in 1920 inspired women to countless other victories in the arenas of politics and government. The western state of Montana, which gave women the vote before the nation as a whole did in 1920, elected Jeannette Rankin as the first female representative to Congress. Soon hundreds and then thousands of women ran for city, county, state, and national office. These included Connecticut's Ella Grasso, the first woman elected as governor on her own right; Lorna Lockwood, the first woman elected to a state's supreme court; and several who have run for president or vice-president of the United States, including Shirley Chisholm and Elizabeth Dole. Appointees to office like Eleanor Roosevelt at the United Nations, Sandra Day O'Connor in the Supreme Court, and Condoleezza Rice at the State Department also are among the many notable women whose talents have enriched political life in the United States and abroad. But their story starts with trailblazers like Jeannette Rankin and Hattie Caraway.