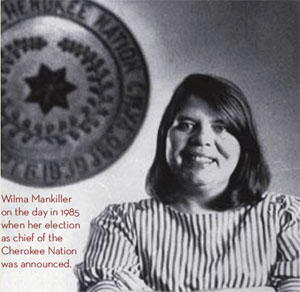 Wilma Mankiller has said that, before her election as the first female principal chief of the Cherokee Nation, "young Cherokee girls would never have thought that they might grow up and become chief."

The woman who did become head of one of the largest tribes in the United States and established thriving community-building programs for her people was born in Tahlequah, Oklahoma. Her family believes their surname signifies a Cherokee military ranking. A U.S. government Indian relocation program forced her family's move to San Francisco when Mankiller was young. There she joined the Native-American activist movement of the late 1960s, which drew inspiration from the development of Third World nationalism in that decade, as well as the U.S. civil rights movement. She raised funds for the support and defense of the young men who seized Alcatraz Prison for 18 months to protest wrongs suffered by Native Americans. These experiences shaped her understanding of Native-American social and economic problems, and of the uneasy relationship between the sovereign tribal nations and the federal government.

Mankiller went to work for the Cherokee Nation, founding its Community Development Department and devising programs like the Bell Water and Housing Project. Each Indian family in the Bell project was responsible for laying one mile of water pipe and for raising the money needed to do so. It was a great success: Many homes got fresh running water for the first time. Valuing her leadership abilities, then Principal Chief Ross Swimmer asked Mankiller in 1983 to run for election as his deputy. Mankiller received death threats during her campaign and some who opposed a woman leader for the tribe slashed her car's tires. She and Swimmer won, however. In 1985 Swimmer resigned and Mankiller assumed his post. She was elected in her own right in 1987, and twice after that, by overwhelming majorities.

Mankiller, who believes Indians should "solve their own economic problems," found herself presiding over more than 220,000 people, with an annual budget of $75 million. She signed a landmark self-government U.S.-Cherokee Nation agreement in 1990 that allowed her people to manage federal funds previously administered on their behalf by the Bureau of Indian Affairs. She also established a tax commission and improved the Nation's courts, education, and police.

Ill health, including two kidney transplants, may have been behind Mankiller's decision not to seek re-election in 1995. She remains, however, the most celebrated Cherokee of the 20th century, receiving the Presidential Medal of Freedom in 1998, as well as several other awards.