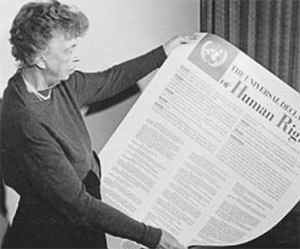 First Lady of the world

Born to a rich and influential family in New York City, Anna Eleanor Roosevelt transformed the role of first lady during her husband Franklin Delano Roosevelt's presidency of the United States (1932-1945). She became an inspiration to millions around the world by giving a voice to the powerless: minorities, women, the poor, and the disadvantaged. She was a controversial figure to others because of her dedication to human rights, civil rights, and women's rights.

Orphaned at the age of 10, Eleanor Roosevelt grew up shy and insecure. She followed her family's tradition of community service, teaching in a settlement house before marrying her outgoing cousin Franklin in 1905. They had six children, one of whom died as an infant. Her husband's election to the New York State Senate in 1910 launched her career as political helpmate.

Several of her biographers see her traumatic discovery in 1918 of her husband's affair with her social secretary as the spur behind Eleanor's expanded social activism, but others point to her education and expanding network of friends as her inspiration. When Franklin Roosevelt was stricken with poliomyelitis in 1921, she turned increasingly to politics, to further his career and her ideals of social justice.

Once Roosevelt was elected president, Eleanor toured a country devastated by the Great Depression. She reported back to him on conditions and tirelessly promoted equal rights for women and minorities, child welfare, and housing reform. She became the first president's wife to hold regular press conferences, to write a syndicated column ("My Day") and do radio commentary, to go on the lecture circuit, and to address a political convention. She used symbolism to great effect: In1939, when the Daughters of the American Revolution banned African-American singer Marian Anderson from performing in their auditorium because of her race, Eleanor Roosevelt resigned from the organization. She suggested that Anderson sing at the Lincoln Memorial instead, in a concert attended by 75,000 people.

After Franklin's death, President Harry Truman appointed her a delegate to the United Nations. She served as chairman of the U.N.'s Commission on Human Rights and played a leading role in the drafting and adoption of the Universal Declaration of Human Rights. In 1961, President John F. Kennedy made her the chair of the President's Commission on the Status of Women, work she continued until her death in 1962.

President Truman admiringly called Mrs. Roosevelt "First Lady of the World." She was, typically, more unassuming in describing her achievements: "I just did what I had to do as things came along."