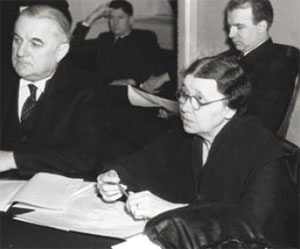 Hattie Caraway was the first woman elected to the U.S. Senate in her own right.

A native of Tennessee, she earned a degree from Dickson Normal College. There, she met Thaddeus H. Caraway, married him in 1902, and had three sons. The family moved to Arkansas, where Thaddeus Caraway was elected to the U.S. Congress in 1912, and to the U.S. Senate in 1920. After he died unexpectedly in 1931, Arkansas Governor Harvey Parnell appointed Hattie Caraway to her late husband's seat. A special election January 12, 1932, confirmed her appointment. Before Hattie Caraway was elected, only one woman – Rebecca Latimer Felton – had served as a courtesy appointment for one day, also as a result of a senator's death.

In contrast to the outspoken Jeannette Rankin, Hattie Caraway made no speeches nor did she take on unpopular causes. Such was her restraint, as a matter of fact, that she earned the nickname "Silent Hattie." She was a diligent public servant, however, taking her responsibilities seriously and building a reputation for integrity. A Democrat, she routinely supported President Franklin D. Roosevelt and New Deal legislation on behalf of veterans and organized labor.

"Silent Hattie" spoke up and took everyone by surprise on May 9, 1932. Invited to become the first woman to preside over the Senate, she announced to the reporters gathered for the event that she was running for re-election. She won that election, thanks in part to Senator Huey Long of Louisiana, who campaigned hard for her. In the 1940s she signed on as a co-sponsor of the proposed Equal Rights Amendment. She left the Senate in 1945, after being defeated by William Fulbright. In a typical understatement, she summed up her fourth-place showing, "The people are speaking."

Her career in public service was not over, however. Roosevelt appointed her to the U.S. (federal) Employees' Compensation Commission and later to the Employees' Compensation Appeals Board. In January 1950, she suffered a stroke and resigned her post. She died at the close of that year. Her correspondence and other papers tracing her years in office were published under the title Silent Hattie Speaks: The Personal Journal of Senator Hattie Caraway.