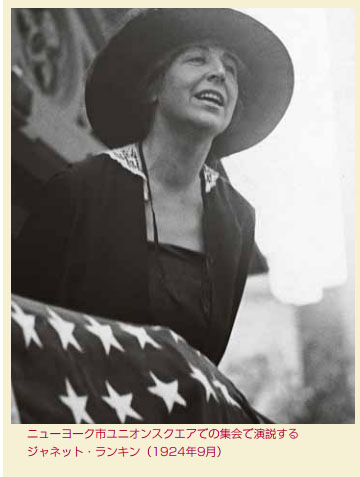 Jeannette Rankin took her seat in the U.S. House of Representatives – the first woman to be elected to either chamber – on April 2, 1917. It would be another three years before women throughout the United States earned the right to vote.

Rankin, born in Montana, was an energetic young woman with a zest for politics and a life-long devotion to feminist and pacifist causes. With a degree from the New York School of Philanthropy (later Columbia University's School of Social Work), she became a social worker in Seattle, in Washington State. To gain first-hand knowledge of her clients' condition, she worked for a while as a seamstress. Rankin joined the 1910 suffrage drive in Washington and led the successful campaign in 1914 for women's suffrage in Montana. The new women voters in Montana helped Rankin become one of the few Republicans elected to Congress in 1916.

Seeing it as her "special duty" to speak for American women, she helped draft legislation helping women and children and supported a constitutional amendment to give women the right to vote. She did not stay in Congress long enough to see suffrage extended to all American women in 1920, however. Voters rejected her bid to become a senator in 1918, probably because of her vote against U.S. entry into the First World War a year earlier.

Rankin returned to social work and to reform organizations, such as the National Consumers' League, the Women's International League for Peace and Freedom, and – in 1919 – attended the Second International Congress of Women in Zurich. Re-elected to Congress in 1940, she cast the only vote in Congress against war on Japan after the attack on Pearl Harbor. With her political career ended by this unpopular vote, Rankin devoted the rest of her life to her favorite causes. At age 86, for instance, she participated in the March of Washington opposing the Vietnam War.

Jeannette Rankin understood the importance of engaging women's talents and expertise to build better societies. "Men and women are like right and left hands; it doesn't make sense not to use both," she said. In her will, she left money to ensure that women could get an education to help improve society. The Jeannette Rankin Foundation, one of the many legacies of this determined and committed American, has been providing educational opportunity to low-income women since it was chartered in 1976.