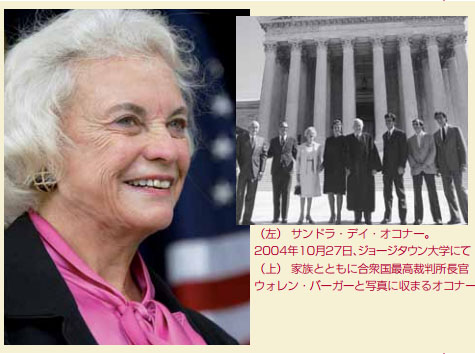 The woman whom President Ronald Reagan would appoint to the U.S. Supreme Court a half-century later was born in El Paso, Texas. She grew up on the Lazy B Ranch in southeastern Arizona. She married John Jay O'Connor III soon after graduation from law school and has three sons.

Despite her law degree – with honors – from Stanford University, O'Connor was turned down by law firms because of her gender, a common practice in the 1950s. O'Connor became deputy county attorney of San Mateo, California. Years later, she recalled that her first job "influenced the balance of my life because it demonstrated how much I did enjoy public service."

The family moved to Germany and then to Arizona, where O'Connor held a succession of jobs, raised her children, and became involved in Republican Party politics. In 1969, she was appointed to the state senate, won re-election twice to that post, and became senate majority leader in 1972. In 1975, voters elected her to a state judgeship on the Maricopa County Superior Court. Four years later, Arizona's governor appointed her to the state's Court of Appeals, and Reagan formally nominated her to the Supreme Court on August 19, 1981. O'Connor brought to the Supreme Court experience in government, as well as being the only sitting justice previously elected to public service.

In her years on the Court, O'Connor's pragmatic bent made her a consummate compromiser, turning her into the "swing" vote in many 5-4 decisions. Many saw her as the most powerful woman in the United States. O'Connor's opinions have provided judicial guidelines on federalism – the constitutional sharing of power between the states and the federal government – and on controversial topics such as affirmative action, the death penalty, and abortion. Through it all, she remained mindful that – as the first woman in the Court – some people might focus only on her sex and not her talent while, paradoxically, her appointment represented an achievement for American women. "The power I exert on the Court depends on the power of my arguments, not on my gender," she once said. But she also insisted that "half the population in my country are women, and it makes a difference for women to see women in positions of authority in high office."

Justice O'Connor retired from the Supreme Court on January 31, 2006. She is currently co-chair of the Campaign for the Civic Mission of Schools, a group dedicated to preparing the next generation of Americans for citizenship.