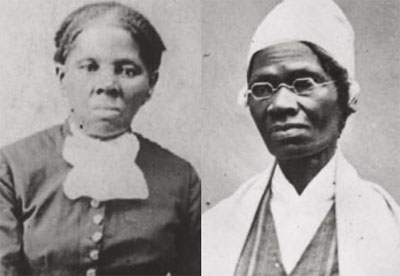 Women were vital to the emancipation movement

At the mid-19th century, America was paradoxically both a freedom-loving and a slave-holding society. In places along the eastern seaboard, slavery was more than 200 years old and an integral part of the economy of the South. But as the century advanced, an increasingly assertive abolitionist movement called attention to the gulf between the nation's ideals and the practice of slavery in the Southern half. Tensions grew and, in 1861, erupted into civil war. It took four years of bloody warfare before the North, under Abraham Lincoln's leadership, prevailed, a result that sealed the end of slavery in the United States.

Women were vital to the emancipation movement, and several stood out as leaders. Former slaves Harriet Tubman and Sojourner Truth, featured below, gave personal testimony to the evils of slavery. A third figure, Harriet Beecher Stowe, a white woman, wrote her famous novel Uncle Tom's Cabin in 1852. The novel inspired widespread enthusiasm for the antislavery cause, particularly in the rising generation of voters in the North. It secured Stowe's place in history as an ardent abolitionist. And, just like Tubman and Truth, she became a celebrity, speaking against slavery at many gatherings.

The freeing of the black population and the granting of voting rights to male African Americans made many women recognize their own unequal position in society. Emancipation adherents like Elizabeth Cady Stanton, Tubman, and Truth later became advocates for the emerging women's rights movement.

Times were changing and women seized the opportunity to take increasing control of their lives. By great personal sacrifice and perseverance, women like Tubman and Truth dedicated their lives to noble goals: freedom from the tyranny of slavery, and human rights for all.