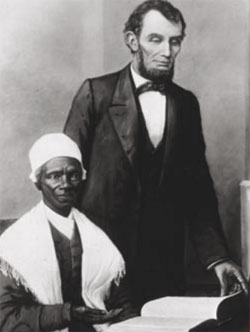 An ardent abolitionist and a proponent of women's rights, Sojourner Truth found her voice in the early 1840s. She was born a slave named Isabella Baumfree. She took the name of Sojourner Truth because she felt God had called her "to travel up and down the land, showing the people their sins and being a sign unto them."

After a difficult life as a youth in Ulster County, New York, she labored for a succession of five masters until New York State abolished slavery on the Fourth of July, 1827. Soon she moved to New York City and began to speak out against the evils of slavery. She was an imposing figure – almost six feet tall – with a powerful, resonant voice, who vividly described the abuses of slavery and the hardships she had endured.

Truth was self-educated and possessed a quick wit and a charisma that often drew large crowds. Facing a heckler in an audience once who said he did not care for her anti-slavery speech anymore than he would a bite of a flea, Truth replied, "Perhaps not, but Lord willing I'll keep you scratching."

A staunch supporter of suffrage, Sojourner Truth became a national symbol for strong black women, and for all strong women. Her speech, "Ain't I a Woman," given at the 1851 Women's Rights Convention in Akron, Ohio, has become a classic text on women's rights.

During the Civil War she gathered supplies for black volunteer regiments and she was involved in various political causes. In tribute to her efforts, President Lincoln received her at the White House in 1864. She was appointed to the National Freedman's Relief Association in the same year, where she worked to better conditions for all African Americans.

After the Civil War, she set out on a final unsuccessful crusade to gain support for her dream of a land distribution program for former slaves. By this time she had made her home in Battle Creek , Michigan, where, surrounded by her family and friends, she died in 1883.

On the 200th anniversary of Sojourner Truth's birth, NASA's Jet Propulsion Laboratory announced that the name for their Mars Pathfinder rover would be "Sojourner", a fitting tribute to the 19th-century abolitionist and champion of women's rights.

Also see: Sojourner Truth speeches (Note: There are several renditions of her speeches, since most of them were transcribed and edited by others.)