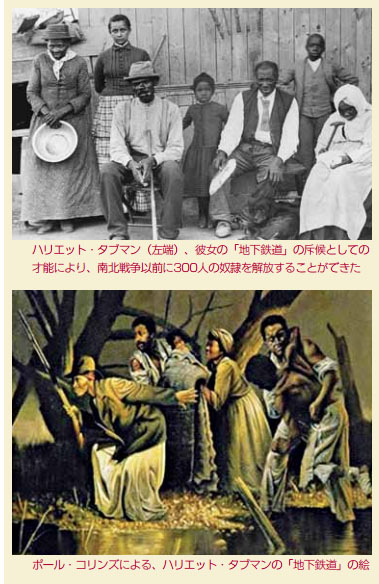 Born a slave in Dorchester County, Maryland, Harriet Tubman was an extraordinary African-American woman who courageously freed herself from slavery by running away to safe haven in Philadelphia , Pennsylvania. In 1850, when the Fugitive Slave Act made it illegal to help a runaway slave, Tubman decided to join the "Underground Railroad," the network of people who helped slaves to their freedom.

The Underground Railroad, neither underground nor a railroad, was an elaborate and secret series of houses, tunnels, and roads set up by abolitionists and former slaves as a way out of the oppressive South. Harriet knew these routes so well that she was never captured and never failed to deliver her "passengers" to safety.

She guided 300 slaves through the Underground Railroad in the years leading up to the Civil War. Tubman made the perilous trip to slave country 19 times. On one trip she rescued her 70-year-old parents, bringing them to Auburn, New York. Auburn became her home, as well. She began an intensive speaking tour in 1860, calling not only for the abolition of slavery, but also for a redefinition of women's rights.

In 1861, when the Civil War began, she served as a nurse, spy, and scout for the Union forces. Well acquainted with the countryside from her days as a "conductor" on the Underground Railroad, she was considered especially valuable as a scout.

Owing to inefficiency and perhaps lingering racial discrimination, Tubman was denied a government pension after the war and struggled financially for many years. She pressed to advance the status of women and blacks, to shelter orphans and elderly poor people. Eventually she did receive a small pension from the U.S. Army, most of which she spent in 1908 to build a wooden structure that served as a home for the aged and needy in Auburn. She worked in that home and was herself cared for in it the last few years before her death in 1913.