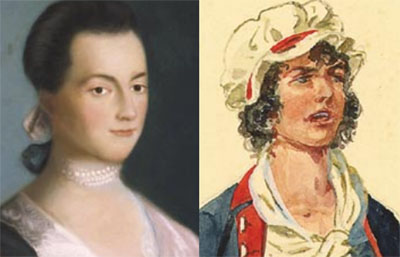 Champion of women’s rights, defender of a nation

Great men – leaders like George Washington, Thomas Jefferson, and Alexander Hamilton – dominate accounts of the War for Independence (1775-1783) that gave birth to the United States of America. These Founding Fathers also have the starring role during the difficult period that followed independence, when the young nation struggled to give legal form to the ideals expressed in the Declaration of Independence. They wrote the Constitution with its Bill of Rights, persuaded the autonomous 13 states to join in a "more perfect Union," and created the nation's democratic government.

American women played a large, if until recently often unacknowledged, role during this era. Many tended the family farms and businesses while the men were fighting the war or fashioning the peace. Others went to battle side by side with the men, nursing the sick and burying the dead. In the stories of Abigail Adams and Margaret Corbin, we see that women in the revolutionary era were as ardently patriotic as the men and were equally determined to enjoy "liberty and the pursuit of happiness." Adams with a pen and Corbin behind a cannon showed that women were valuable partners in the creation of a democratic nation that today guarantees equal rights to all its citizens.