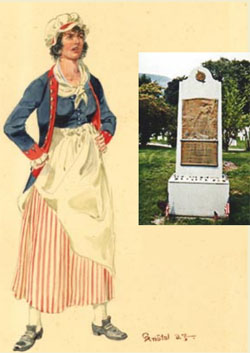 Margaret Cochran Corbin fought alongside her husband in the first two years of the War for Independence. She was the first woman whose valor and sacrifice were recognized with a U.S. government pension for disabled soldiers.

Born near Chambersburg, Pennsylvania, Corbin was orphaned at age 5 when Indian raiders killed both her parents. She married John Corbin when she was 21 and accompanied him when he joined the First Company of Pennsylvania Artillery for service in the Continental Army. Like the other women who followed the troops, she cooked, washed clothes, and tended the sick or wounded. On November 16, 1776, British and Hessian troops attacked Fort Washington, New York, and John Corbin, one of the soldiers firing cannons in defense, was shot and killed. Margaret Corbin, at his side to help him load the cannon, took over loading and firing the cannon until she was hit by grapeshot, which tore her shoulder and wounded her in the chest and jaw.

Her fellow soldiers took her to a hospital in Philadelphia, but she never fully recovered from her wounds, and was left with a disabled left arm. In recognition of her bravery, the Continental Congress granted her a lifetime soldier's half-pay pension. She was formally mustered out of the Continental Army in April 1783. Known by neighbors as "Captain Molly," she died near West Point, New York, probably before her 50th birthday. In 1926, the Daughters of the American Revolution re-interred her remains at the U.S. Military Academy at West Point. A bronze plaque to "the first American woman to take a soldier's part in the War for Liberty" commemorates her courage and initiative near the place of the battle, in today's Fort Tryon Park, New York City.