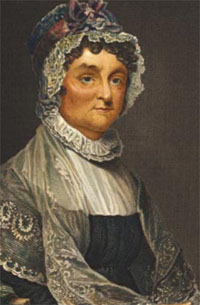 Wife of the second president of the United States and mother of the sixth, Abigail Adams's multiple claims to fame also rest on her championing of women's rights, including the right to an education. Her voluminous correspondence is full of wit and vivid insights into the early years of her beloved nation. She shared and helped shape her husband's political thought and career, and excelled in the management of their farm and finances.

Born at Weymouth, Massachusetts, Abigail Adams lacked a formal education, as did most women of that time. She was, nevertheless, an ardent reader from an early age. She married John Adams in 1764. Their 54-year union – as reflected in their letters to each other – was warm, loving, and intellectually lively. Her husband's frequent travels meant long separations, so she raised their four surviving children and managed their home affairs on her own, all the while acting as her husband's chief political confidant. In 1776, she made her strongest appeal for women's rights in a letter to Adams, then a member of the Continental Congress that declared independence from Britain. "In the new Code of Laws which I suppose it will be necessary for you to make I desire you would Remember the Ladies," she wrote, "and be more generous and favourable to them than your ancestors." Her plea was the first call for the equality that American women would gradually achieve. When George Washington's army was facing seeming destruction later that year, she boldly wrote that the British forces instead would be opposed by "a race of Amazons in America."

Abigail Adams joined her husband in Paris and London when he served as diplomatic representative of the new nation. She dutifully acted as his hostess when he became the country's first vice president, in 1789, and president, in 1797. Defeated by Thomas Jefferson in the 1800 election, Adams retired to their home in Massachusetts, where he and Abigail enjoyed their remaining years until her death in 1818. On that sad occasion, her son John Quincy Adams, a future president, paid her this tender tribute in his journal, "There is not a virtue that can abide in the female heart but it was the ornament of hers."