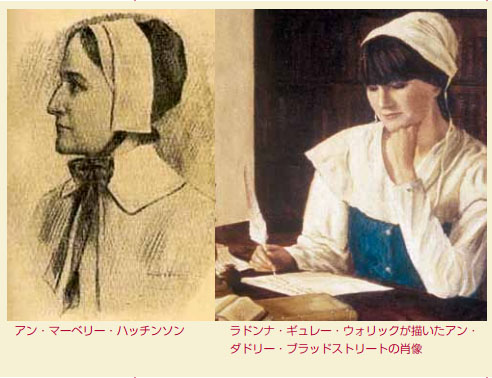 The European immigrants that colonized British North America in the 17th century brought the Old Continent's social and political mores with them. But soon the colonists began to drift away from England, influenced by their new environment, the mix of nationalities and religions, and English traditions of political liberty. An American identity began to emerge. It encompassed, among other traits, increased religious tolerance, an affinity for political liberty and representative government, social mobility, and a tough individualism. This period also saw the establishment of the foundations of American culture and education.

The thousands of women colonists of this era made huge contributions to the settlements of the New World. They raised children and educated them as they cleared the wilderness alongside their husbands, built cabins, and made or traded basic necessities. Women were the mainstays of church and community.

The achievements of the two women named Anne – Hutchinson and Bradstreet – highlight the courage, confidence, and devotion to learning it took to create a nation out of primitive surroundings. Hutchinson was an early advocate of religious freedom who refused to betray her principles despite the threat of exile. The poet Bradstreet, in turn, was the first to touch on the New World experiences that give U.S. literature its distinctive voice.