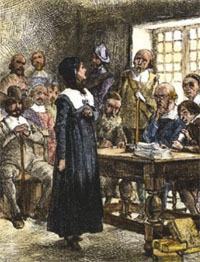 The core American concepts of freedom of religion and freedom of speech had one of their earliest advocates in Anne Marbury Hutchinson. Born in England to a dissenting Anglican clergyman and his wife, she married the merchant William Hutchinson in 1612 and bore him 15 children, according to most sources. Yearning for greater freedom to practice her religious beliefs, in 1634 she persuaded her husband to follow her beloved minister, John Cotton, to the Massachusetts Bay Colony, today's Boston.

Then her troubles began. Well-educated and not afraid to speak her mind, Anne Hutchinson began inviting devout women to her home to reflect on Cotton's sermons. As her reputation grew, the gatherings attracted men, too, including the governor, Henry Vane. In addition to stepping outside the bounds of conventional women's behavior, her denunciation of the colony's ministers and her belief that "he who has God's grace in his heart cannot go astray" set her at odds with the religious establishment. They moved to prosecute the woman Massachusetts's new governor, John Winthrop, criticized for having "a very voluble tongue, more bold than a man." According to Harvard professor Rev. Peter J. Gomes, at her trial "she bested the best of the Colony's male preachers, theologians, and magistrates." Despite her vigorous defense of her beliefs, she was excommunicated and banished in 1638, and moved with her family and other followers to Rhode Island. She is considered one of the founders of that colony, the first to establish complete separation of church and state and freedom of religion in what would become the United States. After her husband's death in 1642, Anne Hutchinson moved to Long Island, in New York. Tragically, she and all of her children save one were killed there in an Indian raid.

"Courageous Exponent of Civil Liberty and Religious Toleration" says the inscription at the bottom of a statue raised in her honor in Boston. But the most fitting tribute to Anne Hutchinson's influence – proof that her ideals ultimately prevailed over her opponents' – is the First Amendment to the U.S. Constitution: "Congress shall make no law respecting an establishment of religion, or prohibiting the free exercise thereof.”