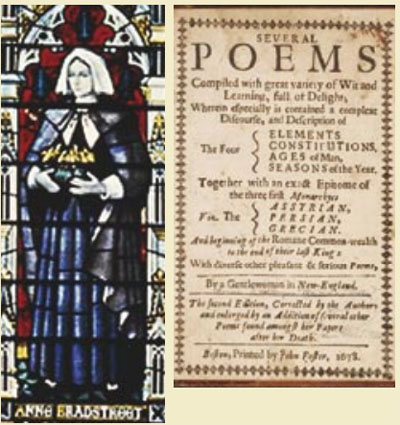 The first important American poet, Anne Dudley Bradstreet was born in England of prosperous parents who had embraced the Puritan faith. She was married at 16 to Simon Bradstreet. With her parents and husband, she sailed to North America in 1630 as a member of the Puritan group that founded the Massachusetts Bay Colony. Unlike most women at that time, Anne Bradstreet grew up with a love of books and received an excellent education in literature, history, and the classics. She wrote poems while she raised eight children, kept a home, and served as a hostess for her husband, a governor of the colony.

Her brother-in-law took her poems to England without her knowledge. They were published there in 1650 as The Tenth Muse Lately Sprung Up in America. Ironically, these – the only poems published during her lifetime – are today considered her least interesting. Inspired by English metaphysical poets, they are long and often dull, dealing with conventional subjects such as religion as seen through the seasons. Contemporary critics and defenders of her work prefer her witty poems on daily life and her warm and loving verses to her husband and children, including one on her feelings upon the death of a month-old grandchild.

Her writings and the few records that remain about Anne Bradstreet reveal her to be a woman of high intelligence and courage. She was painfully aware of her society's disapproval of women who ventured beyond their domestic duties. In one of her poems, she proclaimed, "I am obnoxious to each carping tongue,/That says my hand a needle better fits!" And she dared to remain a friend of Anne Hutchinson, even as the men in the colony, including her husband and father, worked to banish the dissenter from their ranks.

Anne Bradstreet's literary gifts; her exploration of the universal themes of devotion to family, love, and loss; and her courage in standing by controversial friends make her an attractive model for women – and men – everywhere.

If ever two were one, then surely we.
If ever man were lov'd by wife, then thee.
If ever wife was happy in a man,
Compare with me, ye women, if you can.
I prize thy love more than whole Mines of gold,
Or all the riches that the East doth hold.
My love is such that Rivers cannot quench,
Nor ought but love from thee give recompetence.
Thy love is such I can no way repay.
The heavens reward thee manifold, I pray.
Then while we live, in love let's so persever,
That when we live no more, we may live ever.