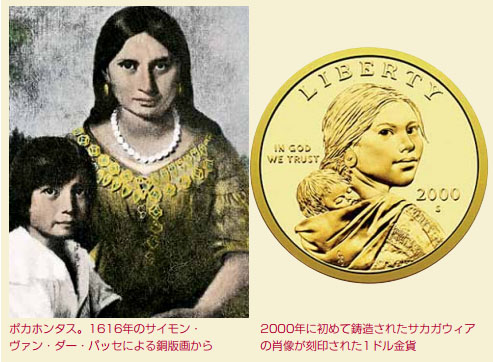 The survival of the American colonies and later the newly born United States was never guaranteed – far from it. Settlers in the early 17th century – even in flourishing outposts – could count on harsh living conditions, scarcity of food, disease, and toil. The "lost colony" of Roanoke, Virginia, is ample proof of the difficulties they faced. Two centuries later in the 1800s, Americans would trek westward across the Mississippi River from the relative comfort of established cities, seeking new territories and access to the Pacific coast. The survival of the colonies and the ability to explore western territories were critical to the establishment and growth of the United States. Two young Native-American women – Pocahontas and Sacagawea – played a vital role in these efforts.

Both women would act as beacons, literally and figuratively, to the settlers they encountered. While still a child, Pocahontas would serve as a bridge between the first European arrivals and local Indian tribes, saving the life of one explorer and acting as a go-between during times of tense relations between the two groups. Sacagawea would take part in the first U.S. expedition to map the lands west of the Mississippi. She lent her skills in tribal languages and knowledge of western territories to guide the first American explorers safely to the Pacific and back.