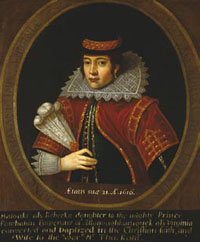 Born around 1595 in the Algonquin tribe of American Indians, Pocahontas became the subject of legend. She was, in fact, a woman who sought to bring peace to the lives of the United States' first settlers and to her own people.

Pocahontas was the daughter of Powhatan, a powerful chief of the Algonquin tribe in the territory of present-day Virginia. Although nobody can be sure, she may have seen European settlers for the first time in the spring of 1607, when Captain John Smith landed with other settlers at Jamestown. Smith himself later would describe a decisive moment in his life during which the young Pocahontas would play a critical role.

According to Smith, he was captured by the Algonquin tribe and threatened with death. Rushing forward and placing herself between Smith and his would-be executioner, young Pocahontas pleaded for the captain's life. Her wish was granted and a friendship developed. Accounts say that Pocahontas went on to befriend the new settlers, bringing them food and delivering messages from her father from time to time.

As tensions arose between the settlers and the Algonquin tribe, an Englishman by the name of Samuel Argall kidnapped the young girl, holding her for ransom until he agreed to terms of settlement. After relations between the Algonquin and settlers had improved, Pocahontas was married to Englishman John Rolfe. Although the timing is unclear, Pocahontas had, by the time of her marriage, converted to Christianity under the name "Rebecca." Importantly for the future of the United States, the marriage helped to calm tensions between settlers and the Algonquin.

In 1616, she made a well-publicized journey to England by ship, along with her husband and their young son. Pocahontas was presented to King James I and to the royal family. Perhaps the most thrilling moment for her was meeting Captain Smith, whom she had believed dead for many years. Tragically, Pocahontas contracted a fatal disease on the trip home and died in March 1617. She was buried in Gravesend, England.

Despite her short life, Pocahontas's romantic story continued to appeal to the American imagination. It has become the subject of much myth-making, as witnessed by the many stories, books, paintings and even films – most recently The New World – based on her life, and the towns, school buildings, and even a Civil War fort named after her.