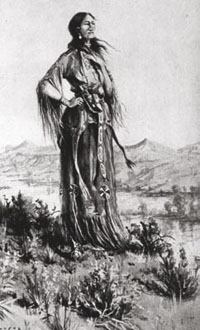 A member of the Lemhi band of the Shoshone Indian tribe in present-day Idaho, Sacagawea demonstrated her strength and intelligence during the 1804-1806 Lewis and Clark expedition to explore the lands leading to the Pacific Coast of North America.

Early in her life, Sacagawea (a name possibly meaning "Boat Launcher" or "Bird Woman") was captured by a rival tribe. She was either sold or traded to a French-Canadian fur trader by the name of Toussaint Charbonneau, whom she later married. At approximately 16 years old, Sacagawea gave birth to a son in the vicinity of Fort Mandan in the Dakota territories of the western United States.

In 1805, her husband was hired to assist a newly formed expedition, led by Meriwether Lewis and William Clark, and charged by President Thomas Jefferson with finding a passage to the Pacific. Sacagawea, who spoke several Indian dialects, quickly proved herself – as an interpreter, as a guide, as a symbol to various tribes of the expedition's peaceful intentions, and even as a diplomat when the expedition encountered the Lemhi band, over which her brother was now chief. She arranged for the Lemhi to provide horses, provisions, and shelter, the very things that made the journey possible. Sacagawea transported and cared for her infant son, Jean Baptiste, throughout the difficult journey.

Following the expedition, Sacagawea and her husband lived for a time in St. Louis before returning to the Dakotas. She is widely believed to have died in 1812, although an elderly woman claiming to be Sacagawea passed away in 1884. In 2000, an artist's imaginary rendering of Sacagawea cradling her son was added to U.S. currency on a dollar coin.