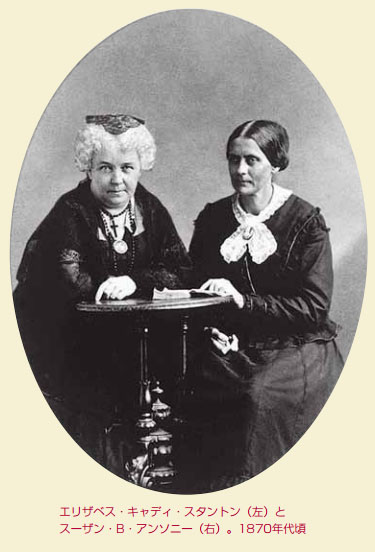 A Woman's Right to Vote

The 19th-century drive to secure equal rights for women arose in part as well-educated women involved themselves in other social issues. Elizabeth Cady Stanton and Lucretia Mott met in 1840 at an anti-slavery conference in London. Unhappy at being excluded from activities of the convention because of their gender, Stanton, Mott, and other female delegates staged a walkout, then began planning a similar convention on women's rights. It took place in Seneca Falls, New York, eight years later.

The political insight of Stanton and her equally famous partner in the 19th-century women's rights movement, Susan B. Anthony, was that in order to change society, you have to change public opinion first. Both women were bent on propagating ideas: Stanton through her writing, Anthony through personal leadership and extensive lecture tours. In addition, both women realized that freedom and liberty for some groups essentially means freedom and liberty for all groups. Arguing from the abolition of Negro slavery, they aimed to convince Americans in late 19th century that women, like former slaves, deserved well-defined and legally protected rights. Finally, they both realized that universal, fair, and free elections are necessary to allow all members of society to express their needs in an effective way.