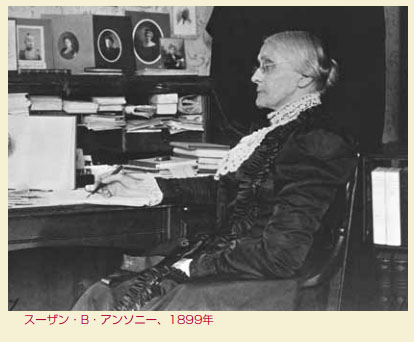 Like Elizabeth Cady Stanton, Susan B. Anthony came from the Northeast, and began her life under the tutelage of a strong-willed father. Born in Adams, Massachusetts, Anthony grew up in the home of a successful businessman, Quaker, and abolitionist. She was known as a gifted child, reportedly able to read and write at the age of three.

In her mid-20s Anthony began a teaching career, eventually settling in the Rochester, New York, area as the headmistress of a local school. She was drawn towards the "temperance" movement, a political and religious movement that viewed alcohol consumption as the root of social and familial ills, and campaigned against the "bottle." Feeling marginalized and unable to speak in a male-dominated organization, Anthony and some friends founded the Woman's State Temperance Society of New York. Around 1850 she met Elizabeth Cady Stanton, and joined her in the larger crusade for women's rights.

Unlike Stanton, Anthony never married, and put all her time and energy into political organizing. Anthony worked as a member of the American Anti-Slavery Society from 1856 until the outbreak of the U.S. Civil War in 1861 and continued to work for slaves' emancipation during the war. With Stanton, she engaged in petition drives for women's rights, founded a progressive magazine, The Revolution, and helped organize the New York Working Women's Association. With the adoption in 1870 of the 15th Amendment, all citizens were guaranteed the right to vote regardless of "race, color, or previous condition of servitude," but not regardless of gender. Appalled at this situation, Anthony took direct action, leading a group of women to the polls in Rochester. Arrested and awaiting trial, she took advantage of the publicity to begin a lecture tour. In 1873, she again engaged in civil disobedience, again trying to vote. She was denied the right to testify at her own trial because of her sex, and given a light fine, which she refused to pay. Spurred on by the fight and the attendant publicity, she worked more vigorously than ever to secure American women the right to vote – through national organizations and individual lecture tours in eastern states and western territories.

In 1888, Anthony organized the International Council of Women and in 1904 the International Woman Suffrage Alliance, bringing her crusade to the international level with meetings in London and Berlin. She died in 1906 – four years after Stanton – but their work paved the way for the ratification of the 19th Amendment to the U.S. Constitution, which, in 1920, granted American women the right to vote.