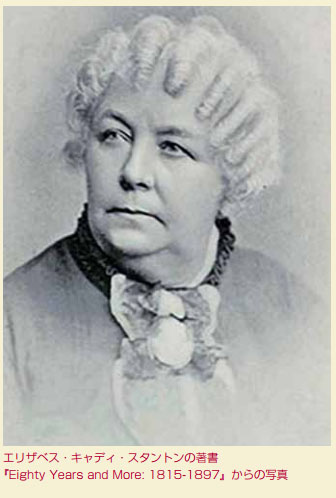 Elizabeth Cady Stanton was one of the major forces behind the empowerment of women in the United States and throughout the world. In particular, she was a founder and leader of the 19th-century women's rights movement, which in 1920 won American women the right to vote.

Born in 1815 to a father who was a prominent New York state congressman and judge, Stanton read law informally under her father's tutelage, and discovered an early vocation to reform the law of the day so it would treat men and women equally. In 1840, she married Henry Brewster Stanton, a lawyer, orator, and abolitionist. This marriage gave her a further entry into politically progressive circles. In 1848, Elizabeth Stanton helped persuade the New York legislature to enact laws protecting the property rights of married women, and in July of that year, along with feminist Lucretia Mott, she helped lead the first women's rights convention in the United States and probably the world, in the New York town of Seneca Falls. The convention passed numerous resolutions appealing for rights for women, and – significantly – a demand for female suffrage (the right to vote) in the Declaration of Sentiments, a document modeled on the U.S. Declaration of Independence.

Elizabeth Stanton gave birth to seven children between 1842 and 1859, but this scarcely diminished her enthusiasm for her work. During the U.S. Civil War, she and her husband worked to abolish slavery, later splitting with other progressives over the lack of emphasis given to the votes-for-women issue.

Around 1850, Stanton began her association with Susan B. Anthony, also a leader in the movement to give women the right to vote. Their 50-year-long collaboration benefited from Stanton's skills as the better orator and writer and Anthony's as the organizer and tactician. "I forged the thunderbolts," Stanton said of their partnership, "and she fired them." Stanton became famous as president of the National Woman Suffrage Association, and also lectured on topics such as maternity, divorce law, and the social effect of liquor, which some felt destroyed homes, marriages, and lives. After 1880 she retired to collaborate with Anthony in the History of Woman Suffrage. She died in 1902, having created a national agenda for women's political and social equality that was to be realized in decades following.

Books by Elizabeth Cady Stanton:
Eighty Years and More: 1815-1897
The Woman's Bible
Solitude of Self