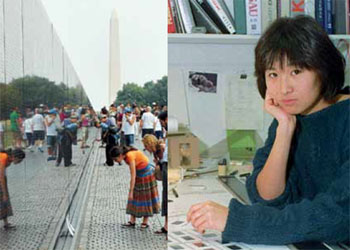 Maya Lin became a controversial figure at the age of 21, when she won first prize in the design competition for a Vietnam Veterans Memorial in Washington, D.C. She still remembers her anger and bitterness when a group of veterans denounced her design as "a black gash of shame." That initial criticism, however, no longer matters. The memorial by the then Yale University architecture student has become the most-visited and beloved monument in the United States and an acknowledged architectural masterpiece. Hundreds of thousands of visitors have been moved and comforted as they read and touched the names of the dead and missing inscribed on its V-shaped black granite wall. Seeing the visitors, and the mementos they leave behind near the names of their loved ones, any observer would agree that Lin succeeded in her goal: "This memorial is for those who have died, and for us to remember."

Since that first famous project, Lin – born in Athens, Ohio, of Chinese immigrant parents – has designed many other significant works that often combine her skills as an architect and a sculptor. Her Civil Rights Memorial in Montgomery, Alabama, in the form of a wall and flat disk over which water flows, was inspired by Martin Luther King Jr.'s "I have a dream" speech. Lin used water as its principal feature, drawing on King's words: "We are not satisfied and we will not be satisfied until justice rolls down like waters and righteousness like a mighty stream." The Langston Hughes Library in Clinton, Tennessee; the Museum for African Art in New York City; a line of furniture for the Knoll company called "The Earth Is (Not) Flat"; and another memorial, The Women's Table at Yale University, are some of her other works.

She has won the architecture prize from the American Academy of Arts and Letters, the Presidential Design Award, and the American Institute of Architects Honor Award, as well as honorary doctorates in Fine Arts from Harvard, Yale, Brown, Smith, and Williams. In 2003, she was one of the selection jurors for the World Trade Center Site Memorial competition. In 2005, Lin was elected to the National Women's Hall of Fame in New York. An award-winning documentary about her life, Maya Lin: A Strong, Clear Vision, took its title from a speech she gave about the monument design process.

In interviews, Lin has said that the Hopewell Indian earthen mounds, Japanese raked-sand gardens, and the American earthworks artists of the 1960s and '70s have influenced her creations. She always works with the landscape. Concerned about the environment, she uses recycled, living, and natural materials in many of her works.