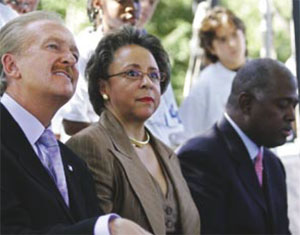 Sheila C. Johnson is a businesswoman, a musician, a philanthropist, and reportedly the first African-American woman to become a billionaire. She is also one of the few women in the United States who owns a professional sports team: She is president and managing partner of the Washington Mystics women's basketball team. Asked about her many achievements by a reporter, she answered, "I always had a drive in me that desired to be the best that I could be."

Johnson was born in Pennsylvania, the daughter of a neurosurgeon who instilled his love of music in his daughter. Her first dream, to become a concert violinist, came true when she became concert violinist and concertmaster in the Illinois All-State Orchestra, and won Illinois's statewide violin competition. After her marriage to Robert Johnson, she taught music in Washington, D.C. Her Young Strings in Action student orchestra was so successful that it was invited to perform in Jordan. King Hussein gave her the country's top education award after she helped set up Jordan's first national music conservatory.

Young Strings in Action also helped pay the family's bills after she and her husband founded Black Entertainment Television (BET) – the first and only cable TV network focused on African-American audiences – in 1980. Sheila Johnson was the network's vice president of corporate affairs and developed an award-winning teen talk show, "Teen Summit," which allowed youth to discuss issues like illegal drug use and AIDS. She recalls that the network faced a lot of problems because of the Johnsons' race. "We had to get advertisers to believe that African Americans would buy products." BET's success and influence, however, was no longer in question when the Johnsons sold the company to Viacom for about $3 billion in 2000.

The couple divorced in 2002, after 33 years of marriage and two children. Since then, Sheila Johnson has launched new business ventures, but her primary interest has been philanthropy – particularly her international work on the safety of children and the opening of cultural opportunities and arts training for youth. She has donated millions to charities, including the United Negro College Fund, the International Center for Missing and Exploited Children, several colleges, and the Sheila C. Johnson Foundation, which makes it possible for poor children to attend college. She sits on the board of several organizations and philanthropies, including Parsons The New School for Design, the Christopher Reeve Foundation, the National Campaign to Prevent Teen Pregnancy, and the Sorensen Institute for Political Leadership.