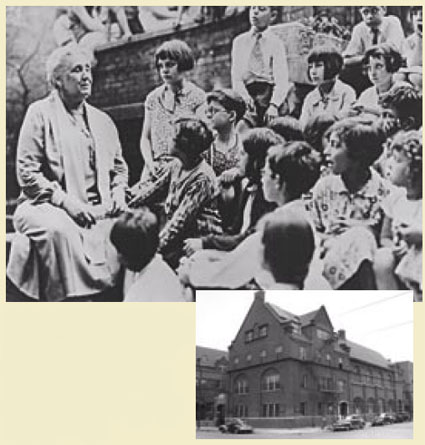 Jane Addams was an internationally known advocate for the poor, a pacifist, a reformer, a leader in progressive groups, and the first American woman to win the Nobel Peace Prize. She is best remembered as the founder of HullHouse in Chicago, one of the first settlement houses that provided services for the working class immigrants in the neighborhood and served as a laboratory for reform. A native of Cedarville, Illinois, Addams graduated from the Rockford Female Seminary. Her father’s death in 1881 and surgery in her back combined to make her nearly an invalid for two years. On a trip to Europe with her school friend Ellen Gates Starr, they visited London’s Toynbee Hall, a settlement house. Inspired by this experience, the two friends founded Hull-House in 1889. Addams lived and worked there until her death. With donations, Hull-House grew to serve more than 10,000 people a week: immigrants from European countries in its first decades, and then African Americans and Mexicans in the 1920s. It offered night school for adults, a public kitchen, a gym, a library, a day nursery for the children of working mothers, and meeting places for trade union groups. Addams realized that the poverty around her would not end unless the country’s institutions organized to get rid of it. She campaigned with Hull-House’s clients for legislation to protect immigrants from exploitation, limit working hours for women, recognize labor unions, institute the first juvenile-court law, and provide for safe work places. In 1910 she became the first woman elected president of the National Conference of Social Work. Addams directed her talents and unflagging energy to other causes, including women’s suffrage, politics (seconding eodore Roosevelt’s nomination by the Progressive Party in 1912), and as a founding member of organizations like the National Association for the Advancement of Colored People (NAACP) — the pre-eminent civil rights and anti-hate organization — and the American Civil Liberties Union (ACLU). She wrote 11 books and many articles. She became involved in the international pacifist movement in the first decade of the 20th century, and was elected chairman of the Woman’s Peace Party and first president of the International Congress of Women at e Hague in 1915. When the United States entered World War I, a move that she opposed, some Americans began to criticize Addams and her causes. Her many achievements led to many awards, most importantly the Nobel Prize for Peace in 1931, which she shared with Nicholas Murray Butler. Jane Addams died in Chicago. Hull-House has been preserved as a national monument to her memory.