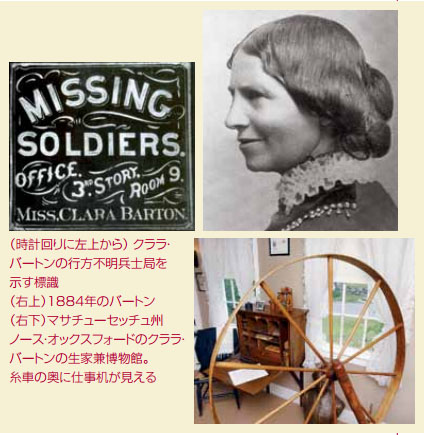 Angel of the battlefield

The image of Clara Barton – tending the Civil War wounded and the dying in her bonnet, red bow, and dark skirt – is a familiar one to most Americans. But Barton's devotion to victims of war and natural disasters did not end with the war in 1865. She went on to become the founder of the American Red Cross, and worked for decades to persuade the U.S. government to recognize the organization.

Born in North Oxford, Massachusetts, Clara Barton was the youngest of five children. Her brothers taught her horseback riding and other "boyish" pursuits, but her family often fretted about her extreme shyness. Once grown up, she taught for several years, eventually moving to New Jersey, where she founded that state's first free (later public) school. Denied the chance to run the school because of her sex, Barton moved to Washington, D.C. She took a job as a clerk at the U.S. Patent Office, earning the same salary as the male clerks. This was a great achievement at a time when government jobs were not available to women.

Then, on April 12, 1861, the Civil War broke out. Thousands of wounded Union soldiers poured into Washington and Barton realized that the government was not prepared to care for them. For nearly a year, she pleaded with the bureaucracy to allow her to bring medical supplies to the field, something no one – let alone a woman – had done before. Permission finally granted, she became the nursing "angel" to soldiers in some of the war's bloodiest battles: Second Manassas, Antietam, and Fredericksburg.

Once the war ended, Barton took charge of identifying and marking the graves of the 13,000 Union soldiers who died at the Andersonville, Georgia, prisoner-of-war camp. She became the first woman to head a U.S. government bureau, the Missing Soldiers Office, and located 22,000 of the missing between 1865 and 1868. On doctor's advice, Barton went to Switzerland in 1869. She joined the relief effort during the 1870-71 Franco-Prussian War. This introduced her to the Red Cross, the organization created in 1864 to provide humane services to war victims.

Barton came home to establish the American Red Cross, which was recognized by the U.S. government to provide aid for natural disasters on May 21, 1881. She resigned its presidency in 1904. She had succeeded in getting the United States to sign the 1864 Geneva Convention and becoming a member of the International Red Cross. She received many awards for her humane work, including the Iron Cross from Germany, the Silver Cross of Imperial Russia, and the International Red Cross Medal.

She died at age 90 in her home in Glen Echo, Maryland.