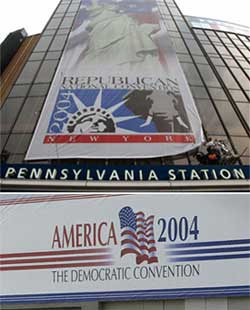 The U.S. system of government was designed to be deliberative, accessible by citizens, and open to a wide variety of opinions and interests. Just as the government has evolved and grown over time, so too have the institutions that seek to influence the government.

The media in the United States is controlled by the private sector and faces no political censorship by the government. There is a strong tradition of independent newspapers, magazines, television, radio, and other forms of media publicizing varying opinions, both critical and supportive of government policy.

The media serves at least three important functions in influencing public policy. First, policy makers are under constant scrutiny by the extensive media industry. Public officials realize that almost anything they do or say – even in private – may appear in the media, and so are reluctant to make decisions or perform acts that they would not want publicized.

Second, the media reports facts and conducts independent analysis concerning public policy issues, thereby educating the public. Finally, the media provides a forum for publishers and broadcasters (and their readers and listeners) to present editorial opinions that may influence others. Many large newspapers, for example, endorse particular candidates for office or publish guest articles favoring one policy over another.

By bringing the acts of public officials to light, educating the public about the issues, and deliberately favoring certain candidates and policies, the media can influence policy directly or, by shaping public opinion, indirectly.

Special interest groups are private-sector organizations whose members share common interests or positions on public policy, and who pool their resources with the intent of gaining a more prominent voice in policy debates. There are literally thousands of such groups representing almost every conceivable interest. Some organizations have a long history of working towards a general goal, while others are formed temporarily to advocate for or against a specific policy proposal.

Prominent examples of special interest groups are those who advocate for environmental protection, benefits for senior citizens, protection for minority groups, and free trade policies.

Various organizations and institutions attempt to influence policy and public opinion in a variety of ways:

• Educating public officials and their staffs about the positive or negative effects of policy proposals;

• Arranging for expert opinions and providing facts, data, and opinion polls to support their positions;

• Arranging for witnesses to testify before congressional
committees;

• Encouraging their members to vote, communicate with their elected officials, and write letters to the media supporting their positions;

• Forming political action committees to contribute money to the campaigns of candidates who support their positions.

These organizations, sometimes called "think tanks," conduct original research, publish books and articles, and prepare position papers on topics related to public policy. Their experts are often called to testify before Congress, and their published works are often cited by others to support their own positions.

While some of these groups have a distinct partiality towards liberal or conservative policies, many are highly respected as authoritative sources of study on matters that affect public policy. Some prominent think tanks with a long history of contributing to the public policy debate include the Brookings Institution, Heritage Foundation, Cato Institute, American Enterprise Institute, Center for Strategic and International Studies, and the Competitive Enterprise Institute, among others.

Trade associations are membership organizations that represent the interests of a particular industry or profession. They communicate the concerns of their members to policymakers both in the legislative and executive branches. Just as importantly, they report back to their members about new policies, rules, and proposals so that the members are educated about what is required of them.

While the primary purpose of labor unions is to represent their members in negotiations with employers, unions also play a significant role in influencing public policy. In speaking for their members, their input is considered whenever trade, environmental, workplace safety, healthcare, and other key issues are debated.

Unions are considered influential because of their ability to mobilize their members to vote and speak out. Unlike business associations, which typically represent a relatively small number of companies, trade unions represent thousands or millions of workers, who are also voters.

Private citizens and businesses commonly form coalitions or interest groups to make their voices heard in the halls of government, but many also take steps on their own to influence government policy. These activities include writing to their elected officials about particular policies, writing letters to the editor of their local newspaper, and appearing at hearings and other public functions where policy is debated.

Because businesses are affected to a great degree by government policies, many corporations have established government relations offices to represent their interests in Washington. While a primary function of these corporate representatives is to educate and communicate to policymakers how proposed legislation will affect the corporation, they also serve other functions:

• Ensuring that their employers are aware of laws and policies that apply to them. This facilitates compliance with the law.

Corporate representatives who are effective and principled advocates of the interests of their companies and of the business community as a whole help government arrive at better-informed ... decisions."
– Bryce Harlow, 1984

Because state and local governments can be significantly affected by federal government policy, they have formed their own associations to ensure that the interests of states, cities, counties, and other governments have a voice.

Several major groups in this category are:

These organizations are particularly vocal on federal transportation, tax, environmental, education, and social policy. Federal policymakers often turn to state and local governments for advice on how best to structure and implement programs such as housing, nutrition, and healthcare that are funded federally, but delivered locally.

There are two major national political parties in the United States: the Democratic Party and the Republican Party. Together with minor parties, these organizations are an important part of the American system of government. Political parties recruit candidates for public office and help raise funds for political campaigns. Other activities include:

The minor political parties also provide organized opposition to those in power, placing an additional check on government power.

While foreign governments can conduct public relations efforts and lobby through their embassies in the United States, they cannot contribute financially to the campaign of any candidate for federal office.