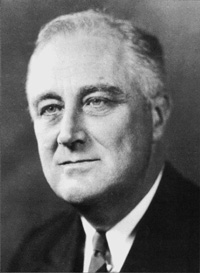 I address you, the Members of the Seventy-seventh Congress, at a moment unprecedented in the history of the Union. I use the word ”unprecedented,” because at no previous time has American security been as seriously threatened from without as it is today....

As a nation, we may take pride in the fact that we are softhearted; but we cannot afford to be softheaded....

Just as our national policy in internal affairs has been based upon a decent respect for the rights and the dignity of all our fellow men within our gates, so our national policy in foreign affairs has been based on a decent respect for the rights and dignity of all nations, large and small. And the justice of morality must and will win in the end....

In the future days, which we seek to make secure, we look forward to a world founded upon four essential human freedoms.

The third is freedom from want―which, translated into world terms, means economic understandings which will secure to every nation a healthy peacetime life for its inhabitants―everywhere in the world.

The fourth is freedom from fear―which, translated into world terms, means a world-wide reduction of armaments to such a point and in such a thorough fashion that no nation will be in a position to commit an act of physical aggression against any neighbor―anywhere in the world.

That is no vision of a distant millennium. It is a definite basis for a kind of world attainable in our own time and generation. That kind of world is the very antithesis of the so-called new order of tyranny which the dictators seek to create with the crash of a bomb.

To that new order we oppose the greater conception―the moral order. A good society is able to face schemes of world domination and foreign revolutions alike without fear.

Since the beginning of our American history, we have been engaged in change―in a perpetual peaceful revolution―a revolution which goes on steadily, quietly adjusting itself to changing conditions―without the concentration camp or the quick-lime in the ditch. The world order which we seek is the cooperation of free countries, working together in a friendly, civilized society.

This nation has placed its destiny in the hands and heads and hearts of its millions of free men and women; and its faith in freedom under the guidance of God. Freedom means the supremacy of human rights everywhere. Our support goes to those who struggle to gain those rights or keep them. Our strength is our unity of purpose.

To that high concept there can be no end save victory.