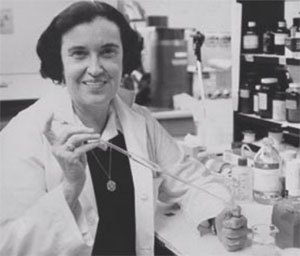 Nobel Prize for physiology or medicine, Albert Lasker Basic Medical Research Award, and U.S. National Medal of Science: These are the most prominent among scores of prizes and honorary degrees awarded to Rosalyn Yalow in recognition of her achievements. With her colleague Solomon Berson, Yalow devised a technique – radioimmunoassay (RIA) – that measures hundreds of substances in the human body, from viruses to drugs to hormones. Thanks to their discovery, we now can screen blood-donor supplies for hepatitis, treat hormone-related health problems, detect foreign substances and some cancers in the blood, and gauge effective dosage levels of antibiotics and drugs.

When Yalow was born in the Bronx, New York, and then when she graduated with honors from Hunter College in 1941, women were not expected to become physicists or mathematicians. But, with so many young men fighting in World War II, she was offered a teaching assistantship in physics at the University of Illinois. There, Yalow was the only woman in the physics department and the first woman to study physics at that university since 1917. She married a fellow student, Aaron Yalow, in 1943 and received her doctorate in 1945.

In 1947, Yalow agreed to work part-time to start a radioisotope service in the Veteran's Administration Hospital in the Bronx. She and Berson used radioactive isotopes to investigate the mechanism behind adult-onset diabetes, the research that led to RIA.

Yalow and two other joint recipients won the Nobel in 1977, but not Berson, who died in 1972. She was the second woman to win this Nobel, and only the sixth to win any Nobel in the sciences.

After receiving the Nobel, Yalow hosted a five-part dramatic TV series on the life of a famous forerunner, Polish-born physical chemist Marie Curie. In 1979, she became a distinguished professor at the Albert Einstein College of Medicine at Yeshiva University. She left that post to become the Solomon Berson Distinguished Professor-at-Large at the Mt. Sinai School of Medicine in 1986. She retired in 1991.

Throughout her years juggling her work as a scientist, wife, and mother of two children, Yalow was mindful of her standing as a trailblazer for women scientists and professionals. She has said, "Those of us who have had the good fortune to move upward ... must feel a personal responsibility to serve as role models and advisors to ease the path for those who come afterwards." And, in her Nobel Banquet speech, she reminded those in power not to undervalue women's potential. "The world cannot afford the loss of the talents of half of its people if we are to solve the many problems which beset us," she said.