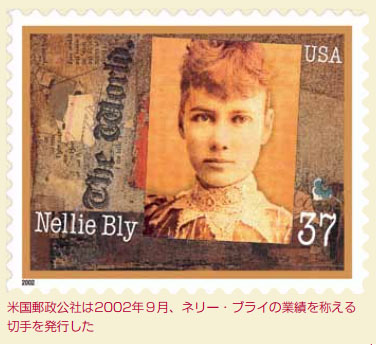 When she was about 21 years old, Elizabeth Cochrane assumed the pen name "Nellie Bly" and wrote her way into worldwide fame in what had been the man's world of journalism.

She was born in a small Pennsylvania town, but her family moved to Pittsburgh after her father's death. An article opposing the goals of the 19th century feminist movement angered Cochrane into sending a stern letter denouncing the writer to the editor of the Pittsburgh Dispatch. The editor was so impressed with her letter that he hired her, making her one of the first women reporters in the United States. Her byline, "Nellie Bly," came from a Stephen Foster song.

Instead of restricting her beat to women's subjects, Nellie Bly focused on ordinary men and women, even going under cover to investigate their lives and jobs. She worked in a factory, for instance, and wrote about child labor, unsafe working conditions, and the poor wages she witnessed first hand. When advertisers began to complain about her stories, her editors tried to restrict her writing. Bly instead traveled to Mexico in 1886-87 and filed stories about the country, describing its poverty and corruption. The assignment ended abruptly when the Mexican government expelled her. Unhappy back in Pittsburgh, Bly decided to try her hand elsewhere. "I am off for New York," said her note to the editors. "Look out for me. Bly."

In 1887, Bly became a reporter for the New York World. There, she pioneered investigative journalism, or, as it was often called, "muckraking" – exposing corruption, crime, and abuse. She had herself committed to a woman's asylum and, once she left, wrote articles that revealed the horrors in the treatment of the mentally ill. "The insane asylum on Blackwell's Island is a human rat trap," Bly concluded. "It is easy to get in, but once there it is impossible to get out."

Despite her vivid writing, her courageous muckraking, and the reforms her articles inspired, Bly is best remembered for mimicking the feat described in Jules Verne's Around the World in 80 Days. With her newspaper's support, she left New York on her 24,899-mile trip on November 14, 1889. She circled the globe, and was back in New York in 72 days, six hours, 11 minutes, and 14 seconds – a new record. The highly publicized trip allowed newspaper readers to follow her travel day by day and made Bly an international celebrity.

Bly retired from journalism in 1895, when she married Robert Seaman, a millionaire industrialist. After his death, she tried unsuccessfully to keep his companies afloat. To escape the collapse of the companies, she left for Europe in 1914, and reported on World War I for the New York Evening Journal.