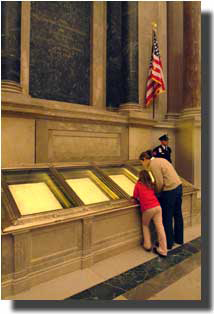 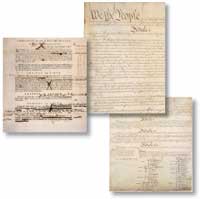 Overview of National, State, and Local Governments in the United States

(The following overview is taken from the U.S. Department of State publication, How the United States is Governed.)

The American system of government, begun as an experiment in liberty and democracy in 1776, has proven to be remarkably resilient and adaptable.

UNDERSTANDING HOW THE AMERICAN SYSTEM OF GOVERNMENT OPERATES

To a visiting observer, the U.S. government may seem straightforward: the Congress makes the laws and the President implements them. A closer inspection reveals a much more complex system of interactions and influences.

As a republic, the ultimate power within the American system rests with the people. This power is exercised through regular, scheduled elections in which voters select the President, members of Congress, and various state and local officials. These officials and their staffs formulate policy, make laws, and direct the day-to-day operations of government.

"I know of no safe depository of the
ultimate powers of the society but the people themselves."
– Thomas Jefferson, 1820

THE ROLE OF THE U.S. CONSTITUTION

The U.S. Constitution is the blueprint for the American system of government. Ratified in 1788, the Constitution defines three separate branches of government (legislative, executive, and judicial), their powers, and how positions in each are to be filled.

One defining characteristic of the Constitution is the system of checks and balances it created to distribute power among the three branches. Each branch exercises some form of power over the others. For example, justices of the Supreme Court (judiciary) are appointed by the President (executive), but subject to the consent of the U.S. Senate (legislative). Likewise, the judiciary can strike down as unconstitutional laws passed by Congress and signed by the President. These and other checks and balances ensure that no single branch of government exercises too much power.

The Constitution, as the supreme law of the land, limits the legislative and executive powers of all levels of government. Any law or portion of a law that is deemed by the courts to be in conflict with the Constitution is nullified, with the U.S. Supreme Court having the final say in such matters.

Amendments to the Constitution are adopted when proposed by two-thirds of the House and Senate and ratified by three-fourths of the states. This is a difficult process, with only 27 amendments having been made since the Constitution was ratified. Of these, only 16 have been adopted since 1800.

The Constitution not only defines the structure and powers of the federal government, but also contains general provisions regarding state government. Each state, in turn, has its own constitution which contains provisions for local governments within the state. Local governments may include cities, counties, towns, school districts, and special-purpose districts, which govern such matters as local natural resources or transportation networks.

The federal government is limited to the powers and responsibilities specifically granted to it by the U.S. Constitution. Some of the powers listed in the Constitution include regulating commerce between the states, providing for national defense, creating money, regulating immigration and naturalization, and entering into treaties with foreign countries.

Over time, however, the Constitution has been interpreted and amended to adapt to changing circumstances, and the powers exercised by the federal government have changed with it. Working with the states, the federal government creates certain laws and programs that are funded federally, but administered by the states. Education, social welfare, assisted housing and nutrition, homeland security, transportation, and emergency response are key areas where states deliver services using federal funds and subject to federal guidelines.

The publisher would like to extend its appreciation to BP America Inc. for its assistance in making this publication possible. The assistance of the following individuals in providing information for this publication is also gratefully acknowledged: